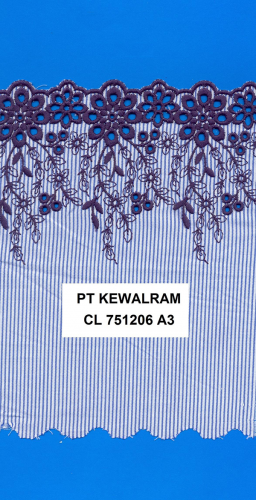 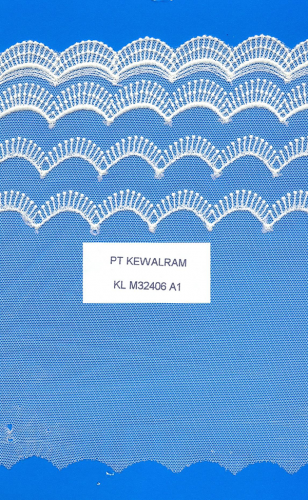 A family firm set up in 1976, Kewalram Indonesia is a large embroidery company located to the south of Jakarta. The company employs 800 people and possesses 57 Swiss embroidery looms, including a number of Epoca 06 machines. It produces up to 400,000 yards (over 365,000 metres) per month. The company, which is totally integrated in terms of yarn dyeing and finishing, is involved in an ongoing expansion phase designed to rapidly expand its production capacity.

Kewalram Indonesia presents a new collection three times a year using motifs and designs created in Europe. The majority of its embroideries are for the lingerie and ready-to-wear markets. The company, which is also active in the home textiles market, is Oeko-Tex Standard 100 and ISO 9001:2008 certified. Its production site has a wastewater treatment unit. It uses non-contaminated cottons certified by the BCI (Better Cotton Initiative).

Kewalram Indonesia exports 85 percent of its output to over 35 countries through its agents. It has representative offices in Switzerland, France, the United Kingdom, and the United States, as well as in Eastern Europe and Hong Kong. Its numerous clients in Europe and the United States include Etam, Sandro, Monoprix, Marks & Spencer, Tesco, Debenhams, C&A, JCP, Salisbury, H&M and Ralph Lauren.

Stay in touch with the show and market's latest news

To be part of the show,
please select your profile

To register or access your personal space,
please select your profile

To register, please select your profile

To register or access your personal space,
please select your profile

To register, please select your profile

You wish to request an appointment with the brand « PT KEWALRAM INDONESIA ».

2. The following information will be given to the brand to contact you:

Your message has been sent to the Eurovet team for approval before it is sent to the brand. Make sure to check your email box regularly as you will receive an asnwer shorty!
Votre message n’a pu être transmis, veuillez vérifier votre connexion à internet puis réessayer

The exhibitor has been well added to your favorites.

The favorite has been deleted.

To book appointments, log in with your login and password.
(created when you registered for the show, if not, create it here )

To do this, log in with your login and password.
(created when you registered for the show, if not, create it here )

You are not registered at "INTERFILIERE SHANGHAI". The registration will only takes a few minutes.
Sign up

REGISTER TO GET ACCESS TO THE TRADE SHOW CONTENTS !

In continuing to browse, you agree to the installation of cookies designed to ensure the proper functioning and interactivity of the site, personalise your browsing, enable targeted advertising appropriate to your centres of interest, and measure the site's audience. For further information and to set parameters for cookies.Ok